by Autumn A. Arnett

When people talk about innovation and moving the country forward, two-year institutions are often not part of the conversation. In fact, community colleges have for years borne the stigma of being last-choice institutions for students who either weren’t ready for four-year institutions or who needed to reskill to stay relevant in the workforce.

“There’s this limited perception of community colleges — people still having an old-fashioned view that we’re a junior college or we’re serving only students who need remedial help,” says Dr. Charles Cook, provost of the Austin Community College District in Texas. “We do that as well. We don’t want people to think we’ve given up on our original message. Our slogan is ‘ACC is for everybody’ — if you need to learn English, if you want to learn a new skillset, if you’re in a dead-end job,” the local community college is there for its students.

But these institutions are also becoming increasingly a first-choice option, both for students coming right out of high school, and those who have been out for some time — and in many cases, for students who are still enrolled in high school, thanks to the growing popularity of dual-enrollment programs. Much of the emphasis in community college is and has always been around helping to prepare students for jobs.

But from Texas to Maryland and around the country, more and more of those jobs are in STEM fields.

“And it’s not just in Montgomery County; it’s really nationwide and worldwide,” she says. “The estimate is that about two-thirds of jobs moving forward will provide some postsecondary training, and a majority of those will require some technical skill.”

Montgomery County, Maryland, has emerged as a leader in the biomedical sciences, with a number of pharmaceutical and biotechnology companies calling the county home. As such, Montgomery College has expanded its biomedical program to help meet the staffing demands of the local industry. Institution leaders, including Latimer, who heads MC’s collegewide STEM unit, are working hard to continue to adapt to the ever-changing needs of industries like biotechnology and computational biology, which Latimer says “have exploded” in recent years. 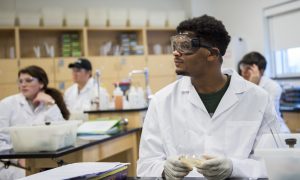 For example, there is a new biotechnology bootcamp, a four-week program formed in collaboration with the Universities at Shady Grove and the University of Maryland, Baltimore County. This program was launched in January 2021 with 22 students to help “kickstart recovery from the COVID-19” pandemic, according to an MC press release. The new program culled pieces of MC’s existing biotechnology for-credit program and condensed them into a one-month training comprised of 64 contact hours to help quickly fill the high demand for vaccine manufacturing, therapeutic manufacturing and diagnostic work. Students left the program prepared for entry-level jobs at top companies around the region — companies which often will pay for students’ continuing education, should they want to continue on to earn degrees in the field, Latimer says.

“We are really focused on helping students understand what those opportunities are, and how to avail themselves of those opportunities,” she says. “It’s the mission of the community colleges in general … to make sure that students are well prepared for that next step. If that next step is to transfer, we want that student to be able to transfer seamlessly. We also want people to be able to advance their careers or change their careers.”

In Austin, ACC is continuing to establish key partnerships with the tech companies that are flocking to the capital of Texas. The community college district has partnerships with companies like Apple, Samsung and Google to develop students’ information technology skills and announced a new agreement with Tesla in June to launch an advanced manufacturing robotics program.

“There are lots of doors, lots of opportunities — we are working with all of the industries,” Cook says. “Ultimately, everyone needs a job, everyone needs a good career. … We’re really trying to serve students individually and help them figure it out, instead of assuming all students need the same thing and move them through like an assembly line to get through education, but really asking, ‘What is it that you want?’”

On and off ramps

Latimer says, overall, about 70% of MC students have indicated that their main goal is to transfer to a four-year institution; 80% if one looks only at students who enroll for the first time out of high school. So while MC is known for its workforce development and continuing education (WDCE) programs, it is also important for the college to look more holistically at the needs of the individual students. 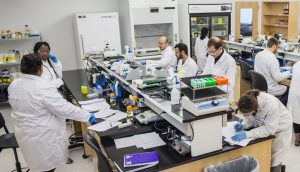 “We’re building bridges, pathways between (for-credit and non-credit programs),” she says. “For too long, they were siloed, you were here for credit or you were here for non-credit. … Increasingly — and part of this has to do with how rapidly some fields are changing — these fields that are emerging, and really very rapidly at this stage, you already have people in fields working who need to pick up credentials.”

“And sometimes that’s when you’re enrolled as a full-time student, and sometimes it’s after you’ve already graduated,” she adds. “Because so much of that curriculum is rich, we can try to modify and bring new things in, but it’s hard to say we can drop something out without the student paying for that.”

Cook says it’s also about recognizing that students’ plans may change along the way and being able to accommodate students, whether they are in the military and looking to remain current to promote national security, already have a degree and are looking to add additional training or just want to learn a skill or a language to improve their marketability.

“We want to take students as far as they can go,” says Cook. “We have great partnerships with our universities — if you want to transfer to a four-year student, we can help you get there. We have two baccalaureate programs, and our legislature just approved us to go up to five, so we can help you with your bachelor’s degree, and we can help you go on to your graduate degree.”

George Twaddle, an assistant professor of life sciences and chair for Biotechnology at Ivy Tech Community College in South Bend, Indiana, is proud of the way his students have embraced research at the two-year level.

“Community college folks of all stripes want to do things,” Twaddle says. “They don’t want to sit and think and talk; they want to do things. Ivy Tech students have won notoriety for their performances in national academic competitions, beating out students from top STEM institutions such as the Massachusetts Institute of Technology, Yale and Cambridge for top honors.

Some of his students have gone on to earn patents for work that started at Ivy Tech. Currently, students are working on a device that can detect the next respiratory pandemic and report on its presence to help limit a spread that might again shut down the whole world.

“My job is to put my students into awkward situations, and they work their way out of them,” says Twaddle, who sees himself as more of a mentor on students’ path to self-discovery than a traditional “sage on the stage.”

And employers want to hire community college students, Twaddle says, because “they have a certain orientation of how to do things,” since they’re often juggling more than just school responsibilities.

“There’s a stigma to community colleges that we only train people to repair washing machines and we weld, and yeah we’re a ‘junior college,’ and you may get some college credit,” he says. “But we go the whole way. And teaching is our Band-Aid. And students have the freedom to choose to learn.”

There’s also a local element that Twaddle believes is attractive to employers.

“The reason my students get hired is not only because they’re good and have the background but because they’re” rooted in the community, and therefore less likely to leave the company.

STEM in every field

Latimer says another reason for the new spotlight on STEM around the country is because of the critical thinking and analytical skills most employers want their employees to have.

“There is so much interdisciplinary work going on right now — I can’t think of a field where data science, data analytics are not playing a role,” says Latimer. “You might be in social science, sociology, even economics … one of the things we are working on is how do you infuse that concept across disciplines so students, no matter what their major is, understand how to ask the right question to get the information you want.”

But there is also still a role for the liberal arts to play in STEM as well, she says, noting, “There isn’t an employer in the country who isn’t looking for someone who can write, who can work on teams. I am fond of saying engineers who can’t write often work for engineers who can.”

The key is developing well-rounded students who can be productive members of teams that are increasingly more diverse. “It’s increasingly likely that you will be working with someone who doesn’t look like you, who grew up somewhere different,” Latimer says.

For Twaddle and other community college faculty members and leaders across the country, there’s an immense amount of pride in knowing they’re preparing students for a global society and even for jobs that don’t yet exist.

This article originally appeared in the July 8, 2021 edition of Diverse. Read it here.